Science fiction and fantasy writer Elinor Caiman Sands has had short fiction published in the Ditmar Award winning anthology, Defying Doomsday, from Australia’s Twelfth Planet Press; the Aurora Award nominated Strange Bedfellows Anthology of Political Science Fiction (published by Bundoran Press) as well in Cosmos Online and elsewhere. She also self publishes stories which can be found on Curious Fictions, Amazon and Smashwords.

She is currently working on her first novel which is based on “Europa Spring,” her first published story. Like several of her stories it features disabled protagonists in hopefully non-stereotypical situations. 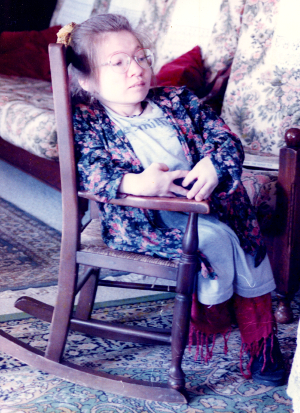 In the past Elinor has worked in both politics and publishing. She was supposedly the first wheelchair user elected to the NUS NEC in the UK and went on to work as Deputy Editor at the Labour Party’s Progress political education organisation. There she interviewed and occasionally ghostwrote for Cabinet ministers including Tony Blair.

Today when not writing Elinor paints or makes digital accessories for her avatar and alter ego Daisy Gator. She has a first class honours degree in history and politics from the University of Nottingham.

Elinor also happens to be a little person–a dwarf–standing at only 3′ 3″ tall.